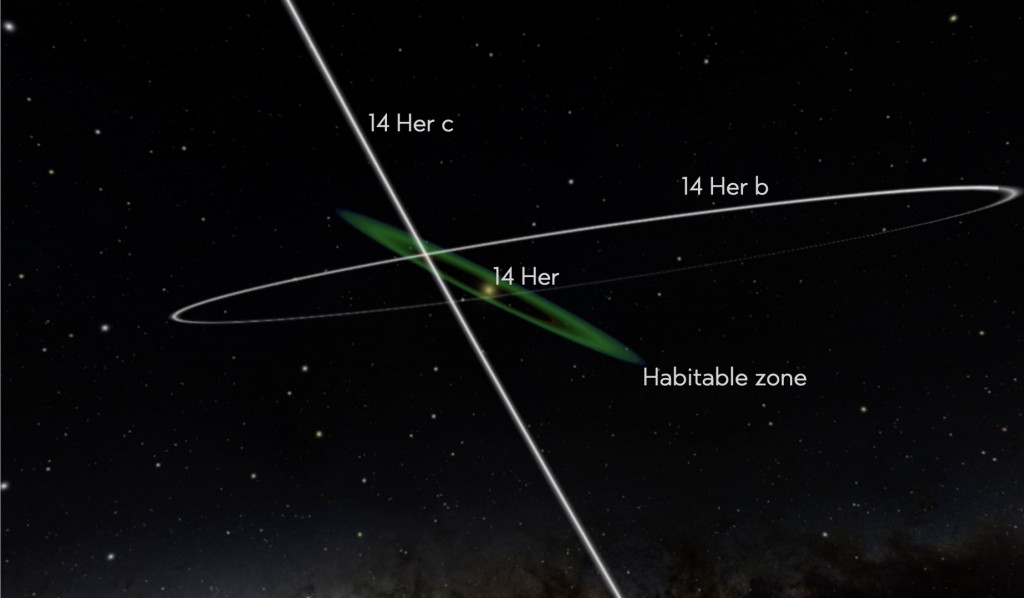 The X-shaped set of orbits in 14 Her.

The forensic evidence left in the 14 Her giant planetary system suggests an active dynamical past. Two giant planets, several times more massive than Jupiter, in highly eccentric orbits around a solar-type star were found orbiting at nearly right angles to each other. In the recently published paper “14 Her: a likely case of planet-planet scattering,” Daniella Bardalez Gagliuffi—a senior member of the Brown Dwarfs in New York City Research Group (BDNYC) based at the American Museum of Natural History (AMNH)—along with a team of orbital investigators measured the full architecture of the two-planet system around the nearby K0 dwarf 14 Herculis, with some surprising results.

At just under 60 light years away, 14 Herculis is a close stellar system to the Sun hosting at least two giant planets. It is a solar-esque star (a little less massive than our own Sun) and therefore over the past two decades it was a target for many astronomical teams in search of nearby solar systems.

While looking carefully at the list of closest stars to the Sun, Bardalez-Gagliuffi, along with AMNH REU summer student Lauryn Williams, recognized that 14 Her showed a significant amount of acceleration in its motion when comparing the positions of the star from the European Space Agency’s missions Gaia and Hipparcos. The baseline between the Hipparcos and Gaia missions is about 24 years and the measured proper motions from each survey for 14 Her differ by 31 sigma, which means that the star is perturbed by an “invisible” mass. “Finding that a star is accelerating when it has a planet is a big red flag that there is science to be uncovered,” says Jackie Faherty, a senior scientist at AMNH and co-author of the paper.

The team mined the literature for past observations of the star and found 20 years of radial velocity monitoring of 14 Her that could be combined with the absolute astrometry to fit the full orbit of the planets. Combining all observations of the system with an open-source orbit fitting code called orvara—primarily developed by co-author Tim Brandt and his team at UC Santa Barbara—the full orbital architecture of the 14 Her system could be determined, including disentangling the mass and inclination for each planet for the first time.

The results revealed two planets with masses that are 9 and 7 times that of Jupiter and are located 2.8 AU and 27 AU from the star, respectively. Interestingly, both planets have very eccentric orbits, but the orbits are actually misaligned. Bardalez-Gagluffi explains, “If you were to look at these two planets from afar, the orbits would cross each other in an ‘X’ pattern with the star at the center.” In our own Solar System, all of the planets are aligned roughly in the same plane, which suggests that they formed in a disk. The bizarre X-shaped set of orbits in 14 Her was interpreted as a consequence of planet-planet scattering, where the mutual gravity of the planets perturbed their orbits. “The 14 Her system looks like the result of a complex game of billiard balls in the sky,” Bardalez-Gagliuffi notes.

Dynamical interactions in solar systems can cause planets to be ejected, leaving high eccentricities on the remaining worlds. Given the orbital parameters the team derived for the 14 Her system, the team suspects that there may have been a third planet in the system that could have been ejected in the past. The potentially ejected world would have been the least massive in the system, so it would have had at most 7 Jupiter masses. An ejected planet of this mass and age would be 250-300 K, slightly warmer than Jupiter and as cold as some of the coldest brown dwarfs, the least massive products of star formation. “This suggests that isolated worlds of these temperatures could be either planets ejected from their systems, or the coldest types of stellar-born brown dwarfs, and we wouldn’t be able to tell them apart until we look at their chemistry,” Bardalez-Gagluffi notes.

When asked what she found most compelling about this project, Bardalez-Gagluffi mentions, “Working on this system was like examining a dynamical crime scene. The discrepant inclinations were a big surprise!”

Given the intriguing results of “14 Her: a likely case of planet-planet scattering,” the team hopes to eventually map every planetary system in the solar neighborhood, and are excited to see what other orbital mysteries might be in store for them.

The findings of the paper are vibrantly brought to life in a video created by AMNH educator Deion Desir using the open-source astrovisualization software OpenSpace.