As one of the last large programs carried out by the Spitzer Space Telescope (Spitzer GO 14128 led by PI J. Faherty) prior to its retirement in 2020, a new survey for photometric variability in young, low-mass brown dwarfs will now pave the way for future searches for cloud-driven variability in directly-imaged exoplanets with next-generation telescopes.

Dr. Johanna Vos and a team of investigators have recently published the findings of their survey in a paper titled “Let the Great World Spin: Revealing the Stormy, Turbulent Nature of Young Giant Exoplanet Analogs with the Spitzer Space Telescope,” with promising results. 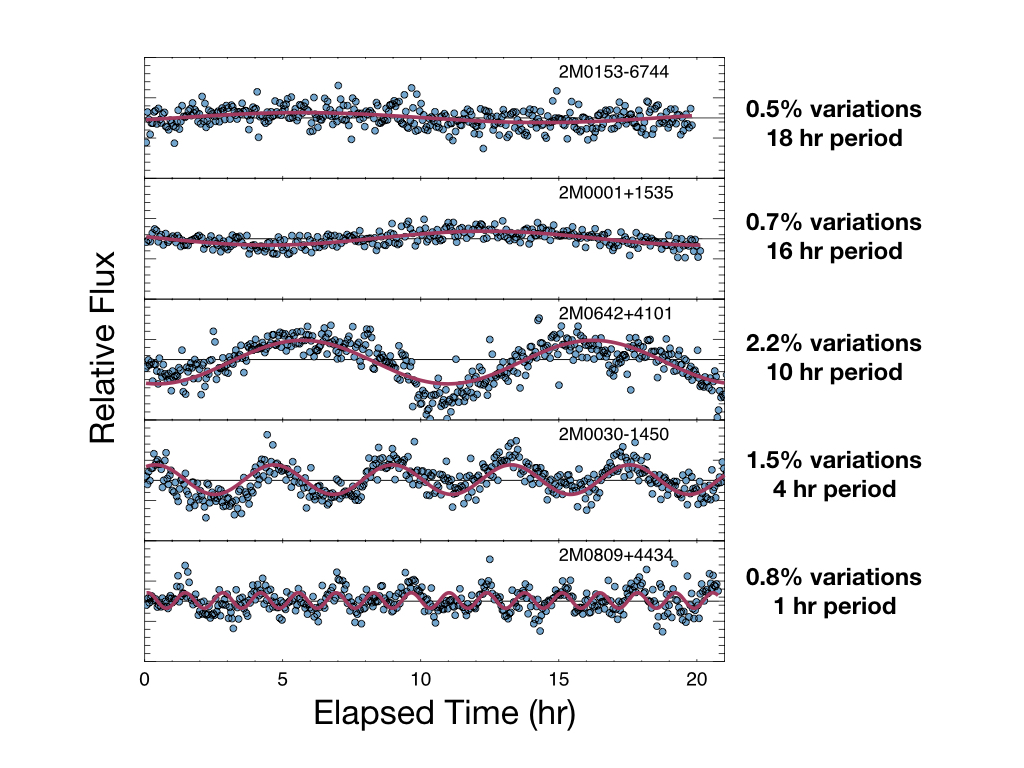 The survey detected new variable objects with a range of rotation periods and variability amplitudes, across a variety of temperatures. Blue points show the measured brightness and the pink line shows the best fit variable model.

The survey focused on "young" brown dwarfs because their very low mass makes them comparable to the giant exoplanets that have been discovered to date using direct-imaging. Vos explains, “Young brown dwarfs are amazing analogs for directly-imaged exoplanets because they have similar properties like temperature, mass, and radius, but are much easier to observe since they are not orbiting a bright host star. For this reason they are sometimes called free-floating or rogue planets.”

Vos and her collaborators used a technique called variability monitoring to look for cloud patterns in the atmospheres of a sample of young brown dwarfs using the Spitzer Space Telescope. Variability monitoring—measuring brightness as the planet rotates—is sensitive to large atmospheric features as they rotate in and out of view. An example of this exists closer to home in our own Solar System: Jupiter’s Great Red Spot drives variability and brightness fluctuations as the planet rotates. The Great Red Spot itself is a patch of cloud that appears darker compared to regions surrounding it. Vos and her team looked for similar patterns in the light curves of 26 young brown dwarfs, to compare to previous results of older and higher-mass brown dwarfs.

The survey’s results are encouraging for future searches for cloud-driven variability in directly-imaged exoplanets, which will become possible with the newly-launched James Webb Space Telescope (JWST) and the upcoming thirty-meter telescopes: the Extremely Large Telescope, Thirty Meter Telescope, and Giant Magellan Telescope. The study predicts that future directly-imaged exoplanets are highly likely to show this cloud-driven variability and the size (or amplitude) of the brightness fluctuations is likely to be large.

Dr. Johanna Vos—an astrophysicist at the American Museum of Natural History in New York City—studies weather patterns on planets beyond our Solar System using world-class telescopes. Hailing from Dublin, Vos received her PhD in Astronomy from the Royal Observatory of Edinburgh. Her research focuses on the atmospheres of brown dwarfs—celestial objects that form like stars but lack the necessary mass and energy to shine like a star—with a concentration on young brown dwarfs in particular because of how they compare to giant exoplanets discovered using direct-imaging.

While the future of this area of study remains rife with possibility as next-generation telescopes such as JWST and the thirty-meter telescopes open up worlds of data on directly-imaged exoplanets, Vos is grateful for the mission and legacy of Spitzer, noting the good fortune of being one of the last large programs before the telescope was decommissioned. On this particular alignment of the stars of both the scientific and fortuitous variety, Vos comments, “The Spitzer Space Telescope was the ideal telescope to carry out these observations. The wavelengths and precision that we could achieve were unmatched by any other telescope, making it crucial to carry out these observations before Spitzer was decommissioned!”

For more information, Dr. Johanna Vos can be contacted via email at jvos@amnh.org. You can follow her scientific journey via Twitter at @johannamvos.